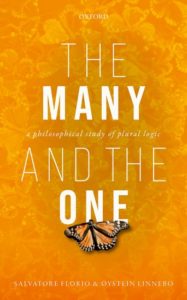 Two more books forthcoming from OUP that I am also really looking forward to seeing. First, there is Salvatore Florio and Øystein Linnebo’s The One and The Many: A Philosophical Study of Plural Logic. Since the ground-breaking work of my one-time colleagues Alex Oliver and Timothy Smiley, starting over twenty years ago, I’ve found this an intriguing topic. And I’m fully persuaded, for example, that low-level plural talk can do much of the work we conventionally use low-level set talk for, in an ontologically innocent way. But Alex and Timothy in the end push things a great deal further (both with e.g. what strike me as inelegant formal complications, and with over-ambitious claims about how far we can replace set theory with a theory of plurals). I’ll be very interested to see what Florio and Linnebo have to say in assessing the state-of-play in work on plural logic, and in their own philosophical discussions. Credit to OUP again: this book will be published as a pricey hardback but also as free open-access online. 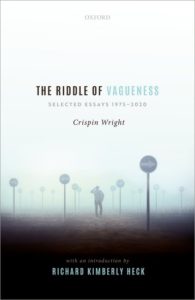 Back in the day, I was for a while interested in the vexed topic of the sorites paradox and formal theories of vagueness. One of the most thought-provoking writers on vagueness at that time was Crispin Wright, and he has continued to revisit the topic repeatedly over the years. He is now collecting together fourteen papers written over nearly fifty years, with a long expository introduction by Richard Heck, as The Riddle of Vagueness (again OUP). I confess I never reached a settled view of what would count as a satisfying answer to the puzzlement about vagueness that I had, and in particular I was (and am) unclear exactly what a formal theory (supervaluationist, intuitionist, degree theory, whatever) is supposed to buy us. Having not thought about all this for a good while, I’m looking forward to revisiting Wright’s earlier papers and reading some of his later work on the topic.

A hardback version of Gödel Without (Too Many) Tears became available a couple of weeks ago (to add to the freely-downloadable PDF and the very cheap paperback). Aimed very much at libraries — because librarians turn up their noses as Am*z*n-only self-published paperbacks  — I hadn’t the foggiest idea how many copies a hardback would sell, or whether I’d recoup the modest set-up costs (including e.g. buying “proper” ISBN numbers attributed to Logic Matters as an official imprint).

Well, Ingramspark (who do the distribution of print-on-demand hardback copies to booksellers) report almost 60 sales. So I won’t end up out of pocket. I haven’t yet had my own ordered copy; so my fingers are still crossed that the hardback looks as good as the paperback. But assuming I’m happy with the copy when it arrives, that encourages me to similarly arrange for hardback library versions of An Introduction to Formal Logic and of An Introduction to Gödel’s Theorems. Watch for an announcement.

As I said a couple of posts back, I badly need to update this website. But it is becoming clear, looking at the under-the-bonnet tangle, that I really need to rebuild the site from the ground up, starting with a blank canvas and transferring across what’s worth keeping, editing as I go. That will appeal to my nerdy side, but will no doubt take quite a while. In the meantime, then, my apologies that pages on this old site are often loading very slowly. Though a couple of minor tweaks yesterday should have improved things slightly.