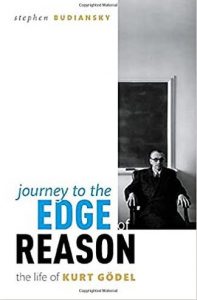 I have just read Stephen Budiansky’s Journey to the Edge of Reason: The Life of Kurt Gödel (OUP 2021). And no, I’m not immediately breaking my self-denying resolution to concentrate on finishing the Study Guide — I wanted to know if this biography should get a recommendation in the historical notes of the relevant chapter!

I’ll be brisk. Budiansky’s book comes much praised. But, to be honest, I’m not really sure why. You’ll certainly learn much more about Gödel’s ideas and intellectual circles from John Dawson’s reliable and thoughtful Logical Dilemmas: The Life and Work of Kurt Gödel (A. K. Peters, 1997). When Budiansky occasionally ventures to explain something in Gödel’s work, he too often just gets it wrong. And a lot of the scene-setting background in his book about Brno in 1910s, Vienna in the 1920s and 1930s, Princeton during and after the war, is routine stuff (and a bit too much of it is just padding). For example, the anti-semitism in the Austrian universities in the thirties, the speedy rehabilitation of Nazi collaborators after the war, is still shocking: but there is no depth to the familiar story as recounted here. Yes, the book rattles along and is easily readable. But does it add much to our understanding of things that matter? I certainly don’t feel any better or wiser for knowing a few more of the sad details about Gödel’s later health and fragile mental state. When does biographical curiosity slide into shabby prurience?  If you want to read about Gödel’s life, stick to Dawson.