Home from Rhodes, post-flight covid tests thankfully negative, a few domestic chores done, and so it’s back to work on the Study Guide …

The initial task is to tidy the hundred or so pages of Part I of the Guide, covering the core mathematical logic curriculum at an elementary level. I’ve posted drafts of the nine  chapters here on the blog, which have each been downloaded hundreds of times. But I’ve had almost no comments/correctiond. Which I’ve decided to take in a cheerfully positive spirit — I like to infer that people don’t think I’m going so horribly wrong that they need to protest loudly (if only to stop me leading their students astray)! So the tidying work will, I hope, mainly be a matter of trying to imposing greater consistency of level and tone between the nine chapters. 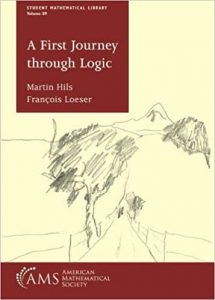 However, first, I had better do a bit of homework, and get acquainted with a fairly recent book which I hadn’t noticed before, A First Journey through Logic by Martin Hills and François Loeser, published in the AMS Student Mathematical Library in 2019. “The book starts with a presentation of naive set theory, the theory of sets that mathematicians use on a daily basis. Each subsequent chapter presents one of the main areas of mathematical logic: ﬁrst order logic and formal proofs, model theory, recursion theory, Gödel’s incompleteness theorem, and, ﬁnally, the axiomatic set theory. Each chapter includes several interesting highlights— outside of logic when possible either in the main text, or as exercises or appendices.” Which is a promising prospectus, with its chapters covering just the same main topics as Chapters 2 to 7 of the Study Guide. However, this is a book of under two hundred small-format pages. Which rather suggests that either the authors aren’t aiming to get very far on any particular topic (though such a book can be very useful when well done, cf. Robert Wolf’s A Tour Through Mathemtical Logic). Or else our authors must have written with considerable compression at the probable cost of ready accessibility.

I’m afraid that our authors have taken the second line. They say in their Introduction that the book originates from a course taught at École Normale Supérieure: and it reads exactly like souped-up lecture notes spelling out carefully lots of technical details, to back up a course of lectures which explain the rationales for the various formal constructions. But without the explanatory, arm-waving, motivational chat, the arid formal details make for a hard and uninviting journey. Perhaps some chapters might serve as brisk revision material: but surely they not the place to make a beginning on mathematical logic.

4 thoughts on “A First Journey Through Logic?”