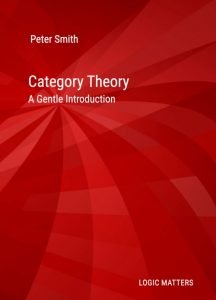 So, I’ve pressed the “publish this” button on the Amazon KDP system for Beginning Mathematical Logic, and will let the world know when it gets through the review process and goes live.

And for my next Big Red Logic Book? A few years back I put together some notes on category theory (running to almost 300 pages). And despite their very rackety half-baked form, they are downloaded startlingly often — almost a thousand times in January.  Ye gods! So it’s decision time. Do I let them continue to stand as they are, despite their unsatisfactory, unfinished, form? Or do I try to make them more respectable, and round them out into a more polished book form?

On the one hand, I’m really pretty embarrassed to leave the notes online in their current state. On the other hand, having putting the work in earlier, I’m reluctant to trash them. Which leaves the remaining option, of getting down to more work and and making a better fist of it. So here goes …

I think I’ll take it in three phases. First, go through the current version, correcting all the typos and thinkos I’ve been told about, improving the presentation wherever I can, to make a better version of the existing  material. Second, get back to doing quite a lot more reading and rereading in category theory, so I can round out the existing material e.g. with more examples, more applications, and additional closely related ideas at the same level. Then third, decide which further topics (if any) I should add at the end to make a more satisfying book (though given the current length, I wouldn’t want the book to extend its reach very far into new territory).

That should all take quite a while, but (I hope) not too many tears. Watch this space for occasional updates.

1 thought on “Category Theory, without too many tears?”