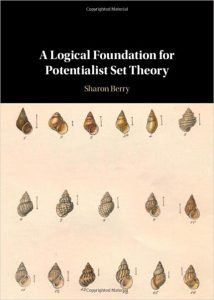 Among the newly published  books in the CUP bookshop today, here’s one that could well be of interest to some readers of this blog, namely Sharon Berry’s A Logical Foundation for Potentialist Set Theory.

It is, as is now the default for new CUP monographs, published at a ludicrous price. However, it is good to report that there is a late draft downloadable from Berry’s website here (though a Word document, sad to relate, so some of the symbolism is a bit gruesome).

The headline news is that Berry advocates a version of potentialist set theory — as she nicely puts it, “the key idea … is that, rather than taking set theory to be the study of a single hierarchy of sets which stops at some particular point …, we should instead interpret set theorists as making modal claims about what hierarchy-of-sets-like structures are possible and how such structures could (in some sense) be extended.” The virtue of this idea is supposed to be that we can avoid problems that arise from assuming that the height of the universe is fixed (giving us baffling questions along the lines of “fixed how?”, “why stop there?”).  There are already potentialist set theories out there in the literature; but Berry gives a new version which depends on deploying a certain natural generalization of the logical possibility operator. Then,

The main work is done in the first two Parts of the book, a bit over a hundred pages. This is indeed interesting stuff. And there is a shorter but attractive exposition of some of the key ideas available here, in a paper jointly by Sharon Berry and Peter Gerdes. (See also and compare Tim Button on potentialism in the second paper of his trilogy linked here.)

The third Part of Berry’s book, another hundred pages, looks beyond set theory, and “turn[s] to larger philosophical questions”. That’s perhaps a mistake, though; from what I have read it might have been better to take some of the Part II topics in a slightly more relaxed and expansive way, increasingly accessibility, and then kept only the most immediately set-theory relevant sections on Part III.