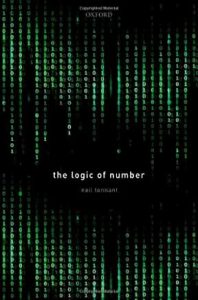 Having been so very struck by Russell and Frege as a student —  a long time ago in a galaxy far, far away — I have always wanted some form of logicism to be true. And the deviant form canvassed by Tennant back in his rich 1987 book Anti-Realism and Logic (I mean, deviating from neo-Fregean version we all know) is surely worth more attention than it has widely received. So I’m looking forward to reading Tennant’s latest defence of his form of logicism, in his new book The Logic of Number, published a few weeks ago at a typically extortionate OUP price.

On a quick browse, the book goes in a somewhat different direction to what I was expecting, having read Tennant’s 2008 piece ‘Natural Logicism via the Logic of Orderly Pairing’. The additional new apparatus for developing arithmetic added in that paper seems not to be in play again here. Rather, the book doesn’t (I think) develop arithmetic as far, but instead goes on to discuss logicist accounts of rationals and reals.

I’ll perhaps try to say something more about the book in due course, when some other reading commitments are done and dusted. Meanwhile you might well in fact be able to take a look if interested. For The Logic of Number, I’m glad to say, has just been also made available at Oxford Scholarship Online. So if your university library has a suitable OUP subscription, it should be free to read.