Of making many logic books there is no end. So a project like the Beginning Mathematical Logic study guide has no terminus. I hit the “pause” button at an arbitrary moment, and published the first book edition a couple of months ago, because I wanted to concentrate for a while on other things. But needless to say, there are already a number of new publications which are possible candidates for being mentioned in the next edition. In particular there are the four first books in the Cambridge Elements series on Philosophy and Logic. Three have already been published — in fact, the first of them just as I was finishing the guide, namely John Burgess’s Set Theory. Then we have John Bell on Higher-Order Logic and Type Theory, and Greg Restall on Proofs and Models in Philosophical Logic. Juliette Kennedy’s Gödel’s Incompleteness Theorems is due any day. The first three should already be accessible, then, via Cambridge Core if your library has a subscription; and even better, Proofs and Models is free to download here for another week. I’ll try to say something brief about each of these books over the coming days. 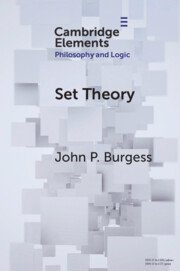 First then Burgess on sets. Like other Elements, this little book is about seventy, not-very-packed, pages (perhaps 30K words?). More than an encyclopedia article, or a handbook chapter, but half the length of a short book like my Gödel Without Tears. Books in the series are aimed at providing “a dynamic reference resource for graduate students [and] researchers”. And that’s already a tall order for a book on this topic, at any rate: for most graduate students in philosophy (even if logic-minded) are likely to be pretty much beginners when it comes to tackling some set theory — and a book accessible to such beginners isn’t likely to also to be of much interest to researchers.

OK, forget the impossible prospectus, and let me try to assess the book in its own terms. First, I certainly enjoyed a quick read. It is engagingly written. And at various points in the later pages Burgess very helpfully put some order into my fragmentary knowledge, or offered genuinely illuminating remarks. So I endorse Rowsety Moid’s comment below, when he writes “I especially liked the second half — on ‘higher set theory’ — and the picture it gives of the various subject areas (descriptive set theory, continuum questions, combinatorial set theory) and techniques (large cardinals, forcing, inner models, infinite games, …) and of how they’re interrelated. I can’t recall anything else that gives as good an overview so briefly.” However, although set theory isn’t my special thing, I didn’t exactly come to this innocent of prior knowledge. And I do have to doubt whether later pages of the book will really be accessible to many of the intended student audience. OK, if may be that all the materials have officially been given to understand e.g. the Levy Reflection Principle on p. 55: but I suspect that a significant amount of mathematical maturity, as they say, would be needed to really appreciate what’s going on.

In headline terms, then, I don’t think that the book as a whole would work as advertised for many students. Still, the first half does make a nice motivating introduction, but one to be followed by (or as RM again comments, perhaps better read in conjunction with) a standard accessible introduction to set theory like Goldrei or Enderton. And then the enthusiast can return to try reading from §8 “Topics in Higher Set Theory” onwards to get a first overview of a few further more advanced topics, with a hope of getting a first inkling of what some of the interesting issues might be, before tackling a second-level set theory text.