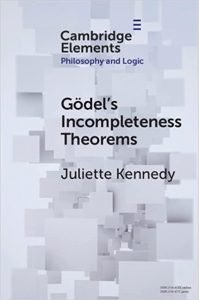 I was in the CUP Bookshop the other day, and saw physical copies of the Elements series for the first time. I have to say that the books are suprisingly poorly produced, and very expensive for what they are. I suspect that the Elements are primarily designed for online reading; and I certainly won’t be buying physical copies.

I’ve now read Juliette Kennedy’s contribution on Gödel’s Incompleteness Theorems. Who knows who the reader is supposed to be? It is apparently someone who needs the notion of a primitive recursive function explained on p. 11, while on p. 24 we get a hard-core forcing argument to prove that “There is no Borel function F(s) from infinite sequences of reals to reals such that if ran(s) = ran(s’), then F(s) = F(s’), and moreover F(s) is always outside ran(s)” (‘ran’ isn’t explained). This is just bizarre. What were the editors of this particular series thinking?

Whatever the author’s strengths, they don’t include the knack of attractive exposition. So I can’t recommend this for reading as a book. But if you already know your way around the Gödelian themes, you could perhaps treat this Element as an occasionally useful scrapbook to dip into, to follow up various references (indeed, some new to me). And I’ll leave it at that.