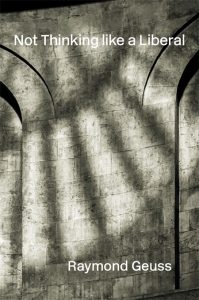 For over ten years, Raymond Geuss and I were both members of the Cambridge Philosophy Faculty. But apart from one year when, like two unbelieving bishops, we had to co-examine a metaphysics paper, I doubt we spoke more than a few hundred words. I suspect he thought I was simply an uninteresting unphilosophical philistine. In fact, we might have had just a little more in common than he suspected, apart from contrarian tendencies — stretching from being both brought up as Catholics to both being amused by the racier ancient Greek epigrams (indeed the first things I ever read by him were his versions in his Parrots, Poets, Philosophers and Good Advice).

I have now just been reading Geuss’s new and very personal short book Not Thinking Like a Liberal (Harvard UP) with great enjoyment and some enlightenment too. He starts by recounting his strange out-of-its-time education, at a Catholic boarding school in the USA, largely staffed by Piarist priests, many Hungarian emigrés. This taught not a narrow authoritarian Catholicism, but a wide-ranging European culture transplanted to Pennsylvania. And Geuss finds — especially in the remembered teaching of one Fr. Krigler — the roots of his own distancing from the shallow “liberalism” of the kind he discerns in much political thinking. The earlier parts of the book are indeed fascinating and insightful.

Later pages found me a bit less carried along. Geuss does no better than others, for example, in conveying what was supposed to be so impressive about his teacher Sydney Morgenbesser at Columbia (Morgenbesser sounds pretty irritating to me). And the concluding pages about unclarity are rather too arm-waving, and the pages about negativity rather too negative, for my liking. But I still very warmly recommend this book as perhaps the most engaging of his writings (apart from those epigrammatic poems, that is!). It got me thinking about scripture and religious traditions, about authority, about education … and about liberalism and the tenor of our times.