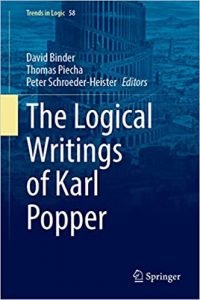 There is a new book just published, collecting Karl Popper’s published papers on logic (mostly from the late 1940s), together with some contemporary reviews of them by, among others, Ackermann, Curry and Kleene, and also some further unpublished pieces by Popper (including one jointly with Bernays).

How much interest is there here for us now? What Popper gives us is an early form of inferentialism, in the sense that he proposes that the logical operators (the “formative signs”) be characterised entirely by their role in deductions. And deducibility is initially characterised in terms of very general structural properties (like weakening and transitivity, as we would say) which make for what Popper calls ‘absolutely validity’. Then he can say, in his earliest paper,

An inference is valid if, and only if, it is either absolutely valid, or it can be shown, on the basis of the inferential definition of the formative signs, to have been drawn in observance of absolutely valid rules.

We have a family resemblance here to themes now more familiar to us from Gentzen and those much influenced by him like Prawitz. Though Peter Schroeder-Heister (who has now written a number of times on Popper’s logic) has in the past argued that Popper’s views are in fact closest to Arnie Koslow’s variant programme in his A Structuralist Theory of Logic (though my good friend Arnie doesn’t mention Popper at all).

The editors of this volume — David Binder, Thomas Piecha, and Peter Schroeder-Heister — give us a 72 page introductory essay ‘Popper’s Theory of Deductive Logic’. I have to report, however, that those wanting an engaging overview will probably be pretty disappointed: it just isn’t that clear and inviting. So I certainly wasn’t left with a burning desire to dig further into Popper’s logical writings beyond the couple of papers I already knew. Except that I will read the joint work with Bernays, since I very much admire the latter.

One very good thing though. Springer have published this as an open access book: you can download the whole PDF here, and then judge for yourself how much you want to explore around.