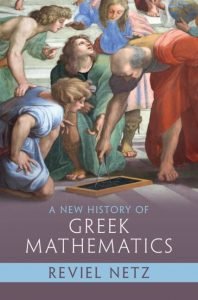 I picked up a copy of the very recently published A New History of Greek Mathematics by Reviel Netz in the CUP Bookshop a couple of weeks ago — an impulse buy, encouraged by the rave endorsements on the back cover.

This is the most irritating book I’ve read (well, not read to the bitter end) for a long time. On the positive side, it is extraordinarily interesting and illuminating about the intellectual and cultural milieus at various stages in the development of mathematics in the ancient Greek world. It told me a great deal about our fragmentary knowledge about the earlier figures, about the kinds of mathematics being pursued, when and why. That background story is told very readably, with zest and engaging enthusiasm. So Geoffrey Lloyd could be spot on when he writes that the book “brings to bear an extraordinary range of material from non-Greek as well as Greek sources, and develops original arguments concerning the fundamental question of why and how Western science developed in the way it did”.

So why the irritation, the great disappointment? Because the author, sad to say, gives no sense at all of having any real feel for mathematics. His accounts of ancient proofs (and actually there are surprisingly few detailed ones) are to my mind uniformly very poorly and unclearly done; they just don’t pass muster by normal expositional standards. I suspect that the author has zero significant mathematical background: and it shows badly. Having — only metaphorically, as I hate maltreating books! — thrown the New History across the room for the fourth or fifth time in frustration, I gave up after Archimedes. Though I took away this much: one day, I’d like to find out more about just what Archimedes knew about conics and the proofs he had available to him, as reconstructed by a competent mathematician.

3 thoughts on “Another book, another disappointment”