A break from logical matters, away for half-a-dozen busy days in Athens, followed by visiting family on the island of Rhodes for a week. Both most enjoyable in very different ways. Then we needed a holiday to recover …

But I’m back down to business. The first item on the agenda has been to deal with some very useful last comments on the draft second edition of Gödel Without (Too Many) Tears, and to make a start on a final proof-reading for residual typos, bad hyphenations, and the like. I hope the paperback will be available in about three weeks. If you happen to be reading this while thinking of buying the first edition, then save up your pennies. The second edition is worth the short wait (and will be again as cheap as I can make it). 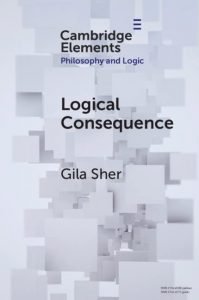 I’m still finding the occasional slightly clumsy or potentially unclear sentence in GWT. I can’t claim to be a stylish writer, but I can usually in the end hit a decently serviceable level of straightforward and lucid prose. But it does take a lot of work. Still, it surely is the very least any author of logic books or the like owes their reader. I certainly find it irksome — and more so with the passing of the years — when authors don’t seem to put in the same level of effort and serve up laborious and uninviting texts. As with, for example, Gila Sher’s recent contribution to the Cambridge Elements series, on Logical Consequence.

Mind you, the more technical bits have to fight against CUP’s quite shamefully bad typesetting. But waiving that point, I really have to doubt that any student who needs to have the Tarskian formal stuff about truth and consequence explained is going to smoothly get a good grasp from the presentation here. And I found the ensuing philosophical discussion quite unnecessarily hard going. And if I did, I’m sure that will apply to the the intended student reader. So I’m pretty unimpressed, and suggest you can give this Element a miss unless you have a special reason for tackling it. 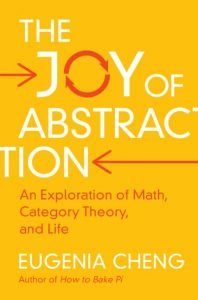 Another book which readers of this blog will probably want to give a miss to is Eugenia Cheng’s latest, The Joy of Abstraction:An Exploration of Math, Category Theory and Life (also CUP). This comes garlanded with a lot of praise. I suppose it might work for some readers.

But the remarks supposedly showing that abstract thought of a vaguely categorial kind is relevant to ‘Life’ are embarrassingly jejune. The general musings about mathematics will seem very thin gruel (and too often misleading to boot) to anyone who knows enough mathematics and a bit of philosophy of mathematics. Which leaves the second half of the book where Cheng is on much safer home ground “Doing Category Theory”.

So I tried to approach this part of the book with fresh eyes and without prejudice, shelving what has gone before. But, to my surprise, I found the level of exposition to rather less good than I was expecting (knowing, e.g., Cheng’s Catsters videos). She is aiming to get some of the Big Ideas across in an amount of detail, and I was hoping for some illuminating “look at it like this” contributions — the sort of helpful classroom chat which tends to get edited out of the more conventional textbooks. But I’m not sure that what she does offer works particularly well. Try the chapter on products, for example, and ask: if you haven’t met the categorial treatment of products before, would this give you a good enough feel for what is going on and why it so compellingly natural? Or later, try the chapter on the Yoneda Lemma and ask: would this give someone a good understanding of why it might be of significance? I’m frankly a bit dubious.

So that’s a couple of recent CUP books that I did acquire, electronically or physically, and am sadly not enthused by. But in their bookshop there is another new publications which looks wonderful and extremely covetable, a large format volume on The Villa Farnesina. On the one hand, acquiring this would of course be quite disgracefully self-indulgent. On the other hand …