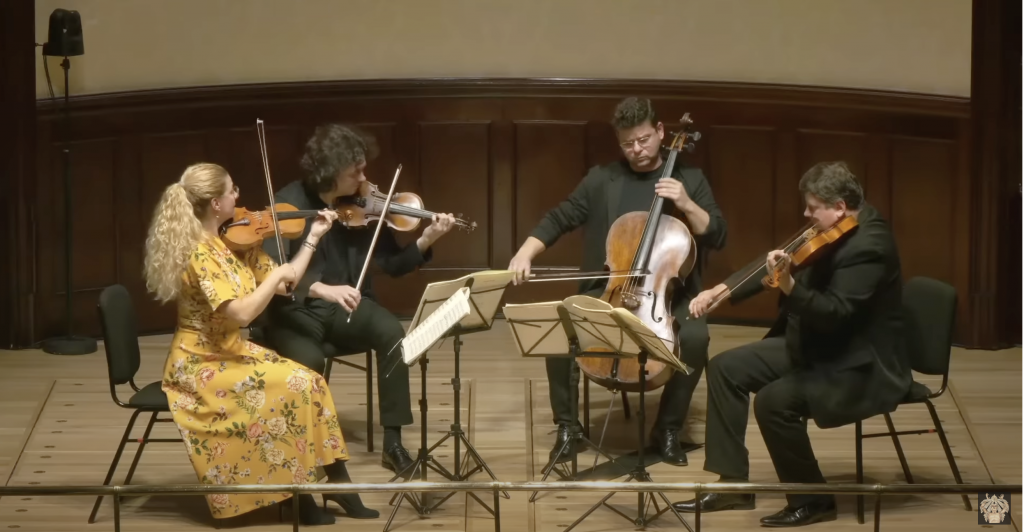 It makes for a striking stage presence, Veronika Jarůšková with her mass of golden hair and a golden yellow dress catching the stage lights,  the rest of the quartet in the most subdued of subfusc. And there’s a lot of drama in the performances too. But in one respect, the way the quartet play couldn’t be further from what is visually suggested — the balance, the closeness of the ensemble, the intense way they listen to each other, is as ever remarkable. So here they are, from a Wigmore Hall concert last week, playing Haydn’s Op. 76 No. 1, Prokofiev’s second String Quartet No. 2, and then Pavel Haas’s String Quartet No. 2 (that’s the one with percussion in the final movement). On this occasion, I thought, the Prokofiev was especially fine: it is difficult to imagine the deeply affecting Adagio being played better.

Veronika Jarůšková founded the Pavel Haas Quartet in 2002, and she is the only remaining member from the original four — though she was soon able to swap cellists with the Skampa quartet, so was joined by her husband Peter Jarusek in 2004. There were then some changes of second violin until the quite excellent Marek Zwiebel joined in 2012. It seemed then that the Quartet was happily settled in a steady state. It must have been a great blow to them when their founder violist Pavel Nikl felt he had to leave the Quartet in 2016 because of family illness. Since then there have been — for whatever reasons, the internal dynamics of a quartet must always be complicated — more changes in the viola seat than they could possibly have wanted.

But for a few months now, it has been occupied by another Czech, Karel Untermüller — who looks on stage such a stolid figure, but his ability to have fitted into the Quartet’s style so seamlessly, so quickly, is rather extraordinary. However, it is not clear what the future holds — I see that at a February PHQ concert at Wigmore Hall, the viola is being played by Dana Zemtsov, while touring the USA in March the violist is Šimon Truszka.

The unsettled recent state of the Quartet must mean that recording plans are on hold for now. But Veronika Jarůšková, Peter Jarusek and Boris Giltburg are going into the studio this month (I think) to record Dvořák trios together. The Czech concerts where they have performed these have had rave reviews. So another terrific CD to look forward to in 2023!