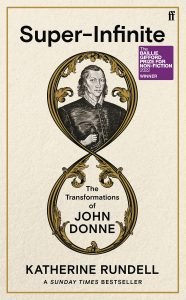 Not, then, a maths post on the infinite, but rather a brief but very warm recommendation for Katherine Rundell’s biography of John Donne.

Having no young children around, we have a good rule which helps to keep Christmas relaxed — no exchanges of presents (I can really recommend that too!). But we might wander down to the bookshops a day or two before, and get ourselves a couple of new books we might particularly enjoy reading over the holidays. I went to Heffer’s planning to buy Irene Vallejo’s much praised Papyrus. However, browsing around, I found myself gripped by the first few pages of Super-Infinite: The Transformations of John Donne. So that’s what we bought. And I have now read it with great enjoyment over the last few days. I can certainly see why the book won the Baillie Gifford Prize for Non-Fiction.

Her pieces in the London Review of Books in recent years show that Katherine Rundell can write wonderful prose, of great zest and imaginative power. And she has been a prize-winning author of books for children. She brings her immense gifts for story-telling and her stylistic panache to her academic work as an English scholar, here recounting Donne’s quite extraordinary life and so illuminating his poetry.

Rundell’s title Super-infinite comes from one of Donne’s own new formations, and the paradox is impatient with the limitations of language and what it can be used to describe. The book stages an often thrilling meeting between Donne and Rundell, and its basis is this supple, flexible wordplay in which sentences jump between registers and tones, between this world and the next, between everything and something more. On a portrait of the young Donne, soulful and seductive: ‘He wore a hat big enough to sail a cat in, a big lace collar, an exquisite moustache.’ On his despairs and griefs, and the deaths of his family members and too many of his young children: ‘He was a man who walked so often in darkness that it became for him a daily commute.’ On the violence of his style: ‘He wanted to wear his wit like a knife in his shoe.’ Phrases such as these do the work which literary critics are sometimes afraid to do. They attest to love, and perform that love, and in so doing Rundell returns us to a Donne who is new yet old, nicely paradoxical, his own man and everyone’s.

I can’t put it better than that, from from Daniel Swift’s review in the Spectator. I couldn’t put Super-Infinite down and was even left wanting more.

So now, having devoured the book so quickly, I suppose I will need to wander now down to Heffer’s again, to pick up a copy of Papyrus.