If the header for this post means absolutely nothing to you, then read no further. But a few people might be interested in my impressions of these classy desktop speakers. Are they worth the not inconsiderable expense?

A bit of background first. I recently re-organized my very small study at home and bought a new iMac. And I’ve found myself listening to music a lot through the surprisingly-not-too-awful speakers on the computer. (I should say that, for someone with something like a thousand classical music CDs, I’ve put up with some really crap music playing systems, and the one I had in my study before rearranging stuff was pretty hopeless: even listening through the iMac’s speakers was about as good.) And I really liked a lot having the music coming from in front of me as I worked at the computer, rather than from shelves to my side. So I started investigating the options for improving things with desktop speakers actually designed for “near field” listening. The reviews for the B&W MM-1 are extremely good, with the price point being the only clear negative for many reviewers. I asked in the Apple Store, and — this is worth knowing, as it was a surprise to me — their “14 day open box returns” policy applies to everything they sell apart from software, including non-Apple kit. I knew from my experience of buying a 27″ iMac and then trading down to a 21.5″ that it really is a no fuss policy, and so it really is a no risk option to take home a pair of these speakers and try them out.

One or two reviews had  mentioned their performance on classical music at relatively low volume being particularly good: this recommendation certainly ticked the boxes for me, because that conforms exactly to my study listening habits.

But of course ‘classical’ could mean anything from Bruckner symphonies to early Venetian lute music (well, both are “classical” in the all-embracing sense that seems to be used in hi-fi reviews); and my tastes are nearer the latter — which is pretty exposing stuff. How do the speakers fare in practice on the kind of music I listen to? Here’s some reactions. The warm positives (just a selection of examples):

So my summary verdict: if you want decent reproduction of chamber music, piano, song — small intimate music — then these small speakers made for intimate up-close listening seem pretty wonderful: as I suppose they should be for the price. They do certainly seem to live up to reviews like this one. As, as I said, I’m no hi-fi buff, and it wouldn’t have taken a great deal to beat what I was using before hands down and cheer me up: so your mileage could vary. However, I’m very happy with them. They certainly won’t be going back to the Apple Store … 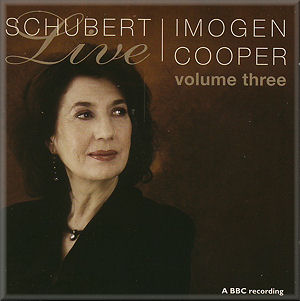 The third double-CD has recently been released of Imogen Cooper’s stunning journey through late Schubert in her QE Hall recitals in 2008 and 2009.

The first two pairs of disks got some extraordinarily warm reviews, and this too strikes me as just wonderful. Thoughtful, deep, utterly persuasive. And lyrically beautiful.

At the end of the second of the new disks she reaches the pinnacle — an amazing performance of D. 960.  I’ve accumulated over too many years recordings of this sonata played by Schnabel, Richter twice, Brendel three times, Schiff, Kovacevich, Perahaia, Uchida, and Lewis as well as the earlier Imogen Cooper; and yet here are new insights, a wonderful overall architecture, and an utterly compelling performance. This could well become my “Desert Island” choice of  all those performances.

Proceed to Amazon right now: you couldn’t possibly be disappointed.

Six months ago — oh, where has the time between fled to? — I very warmly recommended the first volume of Imogen 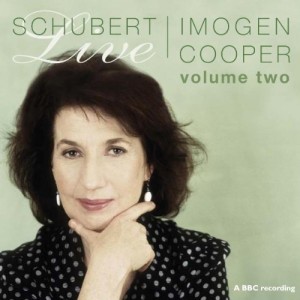 Cooper’s new cycle of live recordings of the later Schubert piano music. The second volume has been out for a while, and is equally terrific.

The second CD ends with the four Impromptus D935, and her performances — it seems to me — more than stand comparison with Schnabel, Fischer, and Brendel’s earlier versions among the classic greats, not to mention Schiff, Uchida, Maria João Pires and the later Brendel among more recent recordings. There are so many heart-stopping moments. I loved Imogen Cooper’s earlier cycle, but now her playing has that perfect authority — while you are listening, you are entirely swept into her vision of the music, and you feel ‘this is how it must be played’. Wonderful.

The Bach recital that Viktoria Mullova gave at the Wigmore Hall last week was simply terrific. Up there with my all-time great concerts, including some Brendel, Holzmair singing Die Schöne Müllerin, and the Lindsays (often). Mullova finished up playing the great Chaconne from the second Partita. And she didn’t attack it as some do. As a reviewer said, “… many violinists try to match its immensity with a heroic sound. But Mullova often went the other way, becoming light and dancing where most violinists would be losing bow-hairs in an effort to wring a bigger sound from the instrument … totally convincing.” Certainly, she stunned the audience who sat in silence for some moments after she finished.

But the revelation for me was the two sonatas she played with Octavio Dantone. I didn’t know their recording of the sonatas on Onyx (I like Rachel Podger’s recording quite a bit, and hadn’t sought out another). But their performances last week bowled me over too, and so I sent off for the discs. And yes, hugely recommended!

I buy few new CDs these days, as I already have ridiculously many (and multiple recordings of most pieces that I really care about it). But I was driving home from my aged mother’s the other day, and the BBC were playing the Schiff/Shiokawa/Perényi recording of the E flat trio D 897, and I was bowled over. The double CD with the other trio, the D897 Notturno and the Arpeggione Sonata came out in 1997, Schubert’s bicentennial year, but — though I’ve always admired Schiff’s Schubert playing — I’d missed this record. But, still in stock at Amazon, it arrived a couple of days ago.

And it indeed is terrific. The performances could hardly be bettered it seems to me — there’s a flow to the playing and a rapport between the three that gives new life to the pieces after years of listening to the Beaux Arts’ recordings. The Gramophone review agrees. (I can’t imagine though why, after a decade, this hasn’t been reissued in a cheaper version: it deserves to be on everyone’s shelves.)

Sometimes, in an idle moment, I jot down — be honest, don’t we all? — a list of the eight discs I would select as my Desert Island Discs. Impossibly difficult of course! But one constant choice is the last Schubert piano sonata, D960 (and if I had to save one of the eight from the waves, then this would probably be it). But which recording? …. Well, that’s almost impossible too.

I’ve for a while had Schnabel, Brendel (1972, 1988, 2000), Richter (three recordings of his too — extraordinary, Schubert stretched to the limit), Imogen Cooper (underrated, but very fine), Schiff, Mitsuko Uchida, Perahia, and Kovacevich. Surely I had Kempff too but that seems to have gone walkabout. And very recently I bought the recording by Paul Lewis, which has received much praise. Yes, I agree! — I really should kick this buying habit. But the prospect of another possible great performance was irresistible. Still, Lewis doesn’t quite work ideally for me: I’ll listen more — but it isn’t the one for the desert island. I still think that that has to be one of the Brendel recordings: after listening to others, I always listen to him again with a sense of coming home. Perhaps I love his 1988 recording the most.

Well, if James can link to a YouTube video, I guess I can! Hardly Shaun the Sheep, and perhaps not adding to the gaiety of nations in quite the same way …. but here’s a rare recent sighting of a certain group, for late-night listening, from an unannounced performance in Bristol in February. Even so stripped down, the magic still works.

If Beth Gibbons’ words here have always seemed hauntingly evocative, maybe that is because she is drawing from — or should I say sampling? — the King James Version rendering of Jude 13.1: “Raging waves of the sea, foaming out their own shame; wandering stars, to whom is reserved the blackness of darkness for ever.”

There still surface rumours of another CD, 10 years after the last studio album.

A number of collections of Bernard Williams’s papers have been put together posthumously. But surely the best has to be the latest, the newly published On Opera which collects together a number of pieces he wrote for various scattered occasions. The four short pieces on Mozart, in particular, are simply wonderful: insightful, subtle, humane, passionate in their commitment to the idea that the best opera is worthy of our fullest engagement and of serious critical response. Read them.