For fifteen minutes of consolation, here is a wonderful performance of Haydn’s Op. 42 String Quartet by the Pavel Haas Quartet. It is on the BBC website, a late night programme from a few days ago: the Haydn starts at 4:59:30.

This must, I think have been recorded from a Wigmore Hall concert some years ago now, when the violist was Pavel Nikl. So the cheering photo, from the quartet’s latest gallery from the fine photographer Marco Borggreve, doesn’t quite fit! But I thought I would post it anyway …

Of course, these sorts of listings shouldn’t be taken too seriously. But the BBC Music Magazine has just suggested a list of the ten greatest string quartets of all time (that’s ensembles, not compositions). It runs, in chronological order,

I certainly wouldn’t have included the Kronos in my top ten (I don’t go for their kind of pretentious repertoire), and I do find the Emerson’s impressive gloss not particularly appealing either. Who would I substitute? Certainly, the truly great Smetana Quartet (1945-1989). And probably the Lindsays (1965-2005), who on their best, take-no-prisoners evenings, could be simply stunning in their emotional intensity, and whose recordings still make wonderful listening.

And of course, I am all for the tenth entry! “Stylistically powerful and richly sonorous, the group is known for its passionate and fearless performances,” says the magazine. And certainly, the PHQ have provided some of the most intense musical experiences of my life. Here they are, from a lockdown recording last year, playing my favourite Dvorak quartet, the ‘American’. (At that point, they were between permanent violists, and are joined by their founder-member Pavel Nikl, who sadly had to leave the quartet a few years ago for family reasons.) Enjoy! 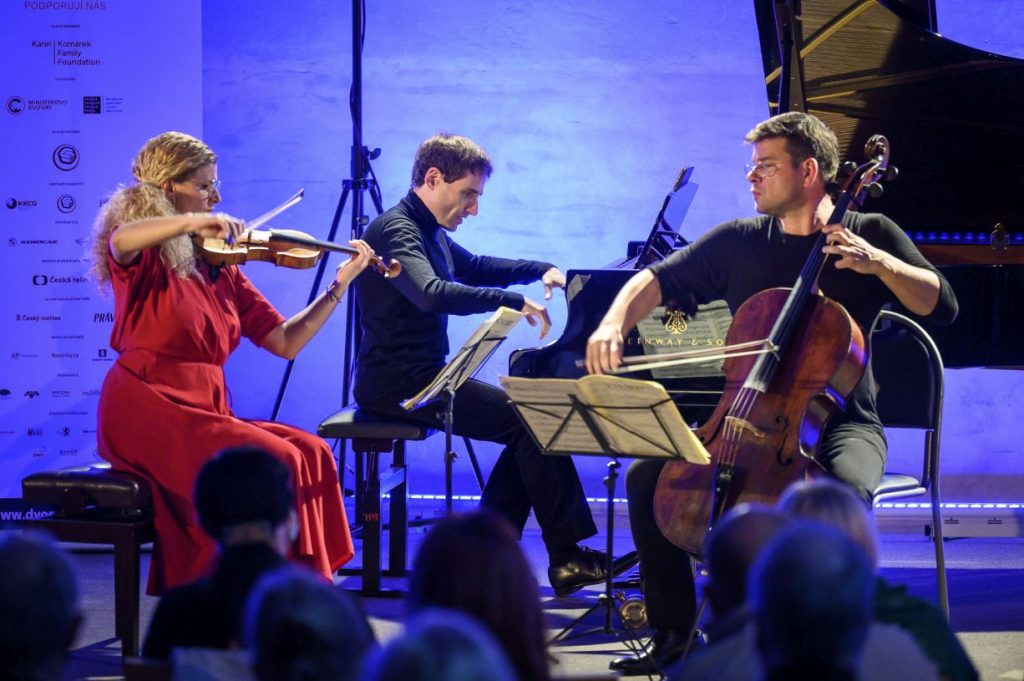 Last Autumn, at the Dvořákova Praha festival, Boris Giltburg with Veronika Jarůšková and Peter Jarůšek of the Pavel Haas Quartet played all four of Dvořák’s Piano Trios to great acclaim. You can now hear the rather monumental third of them from a Dutch radio broadcast, which you can stream here. The first piece in the long concert is the Grieg Piano Concerto with Boris Giltburg. The Dvořák Trio starts about 1 hour 33 min into the broadcast.

Press the purple “Speel” button, and the controller then appears at the bottom of the webpage. Enjoy!

And a reminder that for a day or two more, you can still see the PHQ plus Boris Giltburg and Pavel Nikl in their wonderful Brahms concert at Wigmore Hall in October.

The Pavel Haas Quartet back at long last at Wigmore Hall last night, playing two Brahms Quintets, with their original violist Pavel Nikl for the string quintet and their good friend Boris Giltburg for the piano quintet. In simply great form, as the audience agreed, judging by the reception. Free to stream (performance starts about 4.30 in). Don’t miss them. 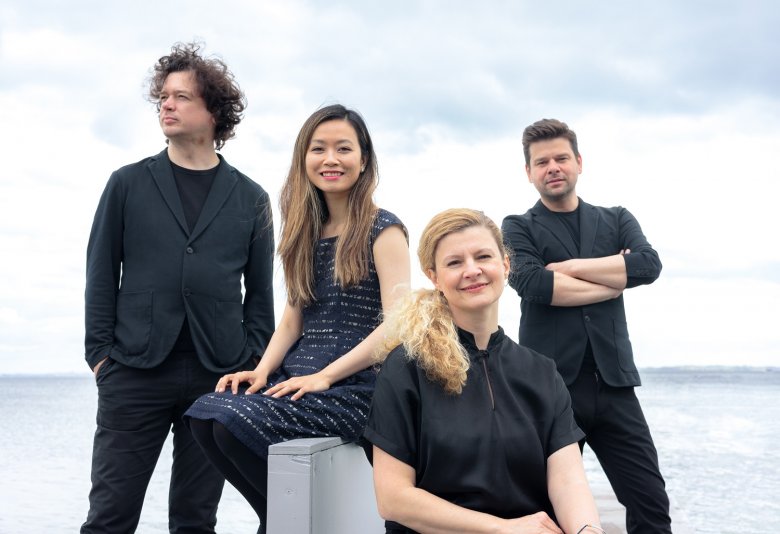 In these days of Covid, our chances of seeing live concerts from our favourite musicians are much reduced. In particular,  since we don’t live in the Czech Republic or nearby, I’m not going to get to see the Pavel Haas Quartet live again for a good while yet. But I will be catching a couple more online concerts, this time recorded for the West Cork Chamber Music Festival. The first is tonight (29th June), and then available on demand for 48 hours. The second is on Saturday (3rd July) and then again available on demand for 48 hours.

I don’t know quite how many readers here ever follow up the musical posts. However,  I do occasionally get ‘thank you’ emails! So let me say more about these concerts. Who knows, it might tempt a few readers to catch one or other of them. I hope so!

Pavel Haas was a Jewish Czech composer like Schulhoff. They both perished in the Holocaust and the Nazis set out systematically to suppress their music by taking over music publishers and banning all performances of their music. This was lethally effective and it took decades to rediscover their music and to return it to its rightful place in the repertoire. This concert features a Prague-based Czech Quartet playing the music of three well-known Czech composers. Martinů was a wonderful composer of chamber music. He wrote: ‘It is hard for me to express the happiness I feel when I start composing chamber music – the delight of leading the four voices, in a quartet one feels at home, intimate, happy.’ Martinů wrote seven quartets that are seldom heard, hopefully a future Festival will include the full cycle. Schulhoff fought in the First World War and post-War turned away from traditional musical forms, associating them with the decadence of the old order that had led to the catastrophe of world war. He spent the Twenties experimenting with different forms both musically and politically. His First Quartet, dating from 1924, is an explosion of energy but otherwise follows a surprisingly conventional path. Janáček’s two quartets are well-known as they trace in music his obsessional love affairs. Milan Kundera wrote: ‘His music is a breathtakingly close confrontation between tenderness and brutality, madness and peacefulness; it condenses the whole of life, with its hell and its paradise.’

The second concerts features Dvořák, Piano Trio No.3 in F minor Op.65 and Piano Quintet No.2 in A major Op.81.  From the concert website again:

For this special concert, Pavel Haas Quartet is joined by Boris Giltburg for two major works by Dvořák, his tempestuous F minor Piano Trio and the infectious delight of his second A major piano quintet. For the Trio the Quartet’s leader, Veronika Jarůšková, and cellist, Peter Jarůšek, join Boris Giltburg. This concert was recorded at the Martinů Hall in Prague. Dvořák’s Third Piano Trio was composed shortly after his mother’s death, it opens in passionate agitation and ends in an emotional tempest. In between comes a tuneful and light-hearted Allegretto leading to a calm and meditative Adagio. Despite his personal loss, Dvořák is able to swathe his distress in a succession of the glorious melodies for which he was so renowned. The opening of the Piano Quintet never loses its magic however often we hear it, while the Andante gives the languid voice of his own instrument, the viola, a leading role. There are no shadows in this unblemished music.

Now available: wonderful new video performances recorded at the Suk Hall in Prague, of Smetana’s String Quartet no. 2 in D minor, Bartók’s String Quartet no. 4, and Brahms, Piano Quintet in F minor, op. 34. The Brahms in particular was a revelation to me — with Boris Giltburg’s playing quite magical. (He is also responsible for some striking photos of the quartet’s new line-up.)

The PHQ sounding so good too with their very impressive new violist Luosha Fang. It is difficult indeed to believe that they had been rehearsing together only a few weeks when this was filmed. A whole series of live concerts are now announced on their updated website  though mostly in the Czech Republic or nearby. But there are two more forthcoming online performances scheduled soon, about which more in a later post.

Boris Giltburg and the Pavel Haas Quartet were playing last night to a live audience at the Louisiana Museum of Modern Art (that’s in Denmark, near Elsinore, on the Øresund coast).

The concert — in which they performed the Brahms and Dvorak Piano Quintets — was broadcast on Danish radio, and the concert is available for listening online on DR P2. (Player at the foot of the page; their concert starts at 43:04). Great stuff! 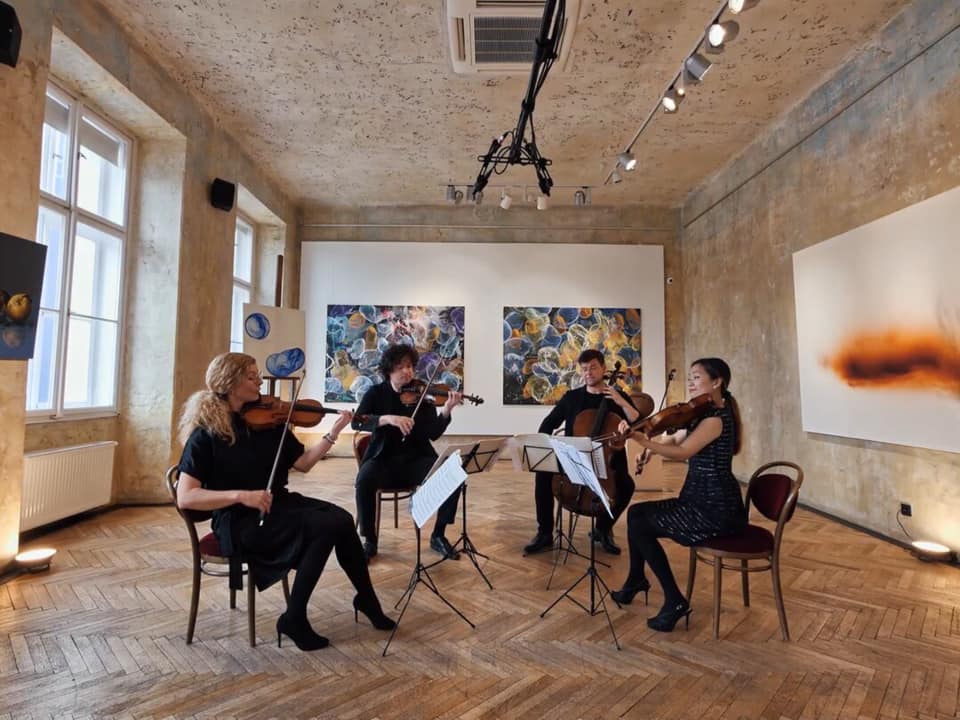 Six months after their last live concert, with Covid restrictions easing in the Czech Republic, the Pavel Haas Quartet have been able to start playing again, streaming two concerts over the last weekend. It was wonderful to hear them.

One highlight, for me, was getting to know Martinů’s 7th quartet, which they played so engagingly in the first of the concerts, recorded for a Duke University series. John Gilhooly at Wigmore Hall had persuaded the PHQ to play a Martinů cycle starting last year  — but of course, like so many other musical plans, all that was thwarted by Covid. Hopefully the cycle (and a recording or two?) will still happen sooner rather than later: if this sample was anything to go by, PHQ will make Martinů their own in the same way that they give such compelling performances of the other Czech greats.

Another highlight was the performance of the Brahms Piano Quintet, joined by Boris Giltburg in the second of the concerts, recorded for a Spivey Hall series. In particular, the gentle second movement was simply magical (with Giltburg making other pianists in a couple of discs I know seem positively flatfooted). Another recording, please, of this together perhaps with the Shostakovich Piano Quintet! — for I’ve also heard Giltburg play that with the PHQ a couple of times quite outstandingly.

These concerts, perhaps, had more significance for the PHQ than just restarting playing; for they were joined for the first time by their new violist Luosha Fang. They had suddenly parted company with the violist, composer and conductor Jiří Kabát at the beginning of 2020, asked the prize-winning Luosha Fang to join them, and (again) plans were blown up by Covid. Now, I don’t have a good enough ear to be the best judge, but from these concerts she is surely an inspired choice for them. Her playing seems wonderful (for example in the exposed viola part in the movement  of the second quartet by Pavel Haas that PHQ played as an encore for the Duke concert), and very much in keeping with the style of the quartet. We can only hope this transatlantic marriage works out for them all.

The links I gave for the concerts in a post last week have now expired, as each was only available for three days. Hopefully the recordings will eventually be made available more widely.

Added: The PHQ and Boris Giltburg are playing the Spivey Hall programme, plus Bartok, in the Library of Congress series, freely available from June 18th —  details here. 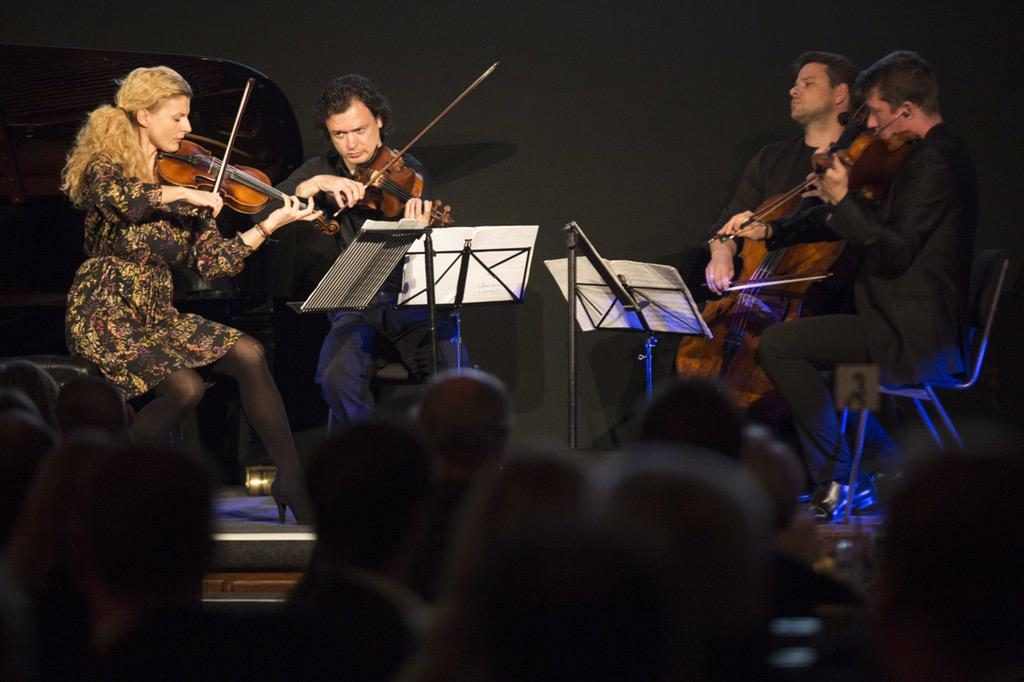 The great Pavel Haas Quartet suffered a real blow at the beginning of 2020 when they suddenly parted company with their violist. And then Covid struck. Like so many musicians, the PHQ have been having a hard time of it since. They were able to play a few local concerts in or around the Czech Republic in the summer, joined again by their founding viola player Pavel Nikl (as in the photo above). But it is six months now since they last gave a concert. However, an online concert is announced for Friday May 7th, for a series organised by Duke University, with the video available for 72 hours. They will be with their new violist, Luosha Fang, playing Beethoven’s Quartet in F Minor, op. 95, no. 11 (“Serioso”) and Martinů’s Quartet no. 7, H. 314 (“Concerto da camera”). For details, and very inexpensive tickets, see here. (The concert isn’t that well advertised, so do spread the word.)

The PHQ are filming in the Suk Hall at the Rudolfinum, and a second online concert will be with the pianist Boris Giltburg. This is available from May 8th, from Spivey Hall at Clayton State University — though the programme details don’t seem to be given. But (again cheap) ticket details are here. (The same or another concert with Boris Giltburg will be in  the Library of Congress series.)