An Introduction to Gödel’s Theorems  was first published by CUP in 2007 with the second edition appearing in 2013.

A corrected version of the second edition is now available as a freely downloadable PDF.

Many people, however, prefer if possible to work from a physical book. So you can also get a print-on-demand copy of this version as a very inexpensive large format book from Amazon. US link; UK link. Find on your local Amazon by using the ASIN identifier B08GB4BDPG in their search field. 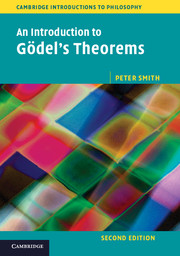 (You don’t get the original pretty cover; but the quality of the printing and paper is very acceptable, especially given the low price.)

The book previously appeared in the series, ‘Cambridge Introductions to Philosophy’ from CUP.  But don’t let that mislead you! IGT is actually a fairly techie logic book, originally intended for advanced philosophy undergraduates and postgraduates. It is quite long (388 pp.) and is full of theorems — so many mathematics students should find it useful too. Still, it does aim to give a relatively relaxed and approachable exposition of the technicalities around and about the incompleteness theorems and related results, and it does also provide a modest amount of more philosophical commentary on the interpretation and significance of the theorems. Gödel Without (Too Many) Tears is a much shorter book (146 pp.) based on my notes for the lectures I used to give to undergraduate philosophers taking the Mathematical Logic paper in Cambridge. You can think of this as a cut-down version of the longer book, aiming to give some of the key technical facts about the incompleteness theorems without too many digressions. It is still full of technical exposition and quite short on philosophical asides — the main aim is to put a reader in a position where they can begin to understand what’s going on in discussions of supposed philosophical implications of the incompleteness theorems.

This book is now in a second edition and is available as a freely downloadable PDF.

But again, many will find it easier to work from the decently produced but extremely inexpensive print-on-demand paperback, available from the second half of November 2022, with the ISBN 1916906358.

The paperback is Amazon-only. There will from 1 December 2022  also be a hardback intended for libraries and available to order from bookshops and library suppliers  as well as Amazon. Its ISBN is 1916906341. Please do ask your university librarian to order a printed copy for the library.

There are exercises with solutions for early chapters in IGT2. Now that I see that they are being made some use of, I plan to add further exercises one day, but this isn’t a top priority: